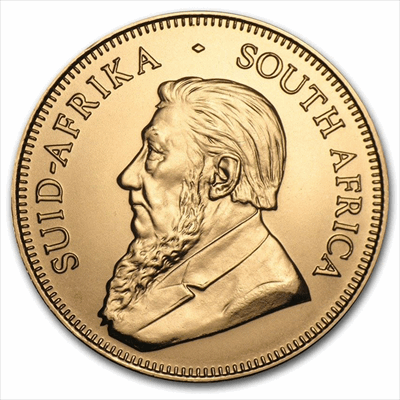 The 1/2 ounce Gold Krugerrand is in Uncirculated Condition. Each 1/4 ounce gold Krugerrands are composed of 22k (91.67%) gold and have Gold Content of 1/4 Troy Ounce Pure. Dates will be of Our Choice. The South African Krugerrand is the most widely owned gold bullion coin in the world, representing 46 million ounces since its introduction in 1967. The purpose of the original issue was to encourage individual ownership of gold, and it must be said that this objective has clearly been met by the Krugerrand. The coins were intended to be used as currency in South Africa, and as such are made of a durable 22k (.9167) alloy of gold and copper. This alloy, known to historians as crown gold due to its use in English gold sovereigns, gives the coins their distinctive rich color and grants them a durability that bullion coins of higher purity often lack.

Obverse: Showcases a left facing effigy of Paul Kruger who is South Africa’s first and only president as well as “South Africa” in Afrikaans and English.
Reverse: Features the national animal of South Africa, the Springbok antelope prancing through a field along with its purity and year struck.