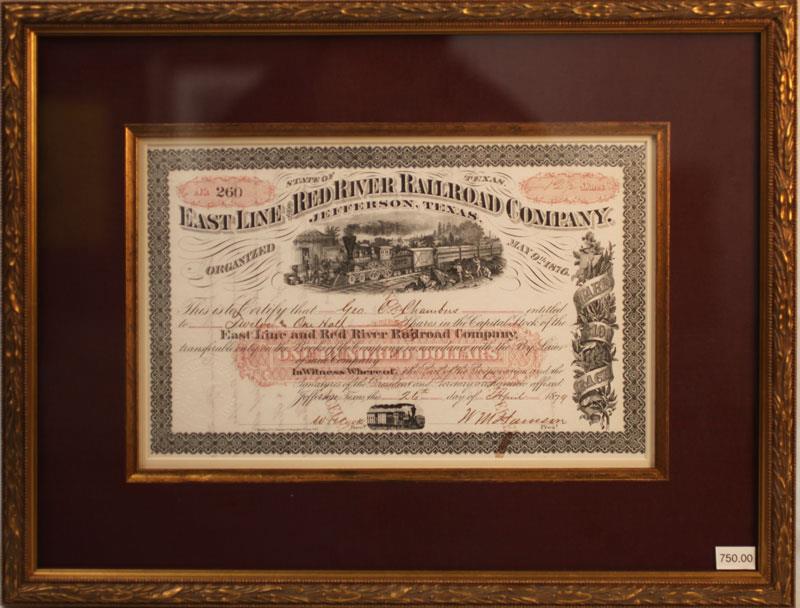 About the East Line Red River Railroad:
The East Line and Red River Railroad's principal port was Jefferson, on Big Cypress Bayou. Primarily used for freight moving into and out of northeastern Texas, it was the largest river port in the state and by 1870 was second only to Galveston in volume of traffic. However, the number of railroads projected and under construction threatened to divert the traffic away from Jefferson, and the East Line and Red River Railroad Company was promoted by William M. Harris, Benjamin H. Epperson, and other local businessmen in an effort to protect the town's trade area. The company was chartered on March 22, 1871, to run from Jefferson to Sherman and from there to the western boundary of the state.

Construction began in 1876, and the first twenty miles to Hickory Hill opened on December 5. The company reached Daingerfield on July 4, 1877, Leesburg in 1878, and Sulphur Springs in 1879. Track reached Greenville, 124 miles from Jefferson, in late 1880. The promoters of the East Line and Red River built the company as a narrow gauge railroad, which later necessitated a costly change to standard gauge.

The railroad was later acquired by Jay Gould in June 1881, who sold it to the Missouri, Kansas and Texas Railway Company (Katy) on November 28, 1881.