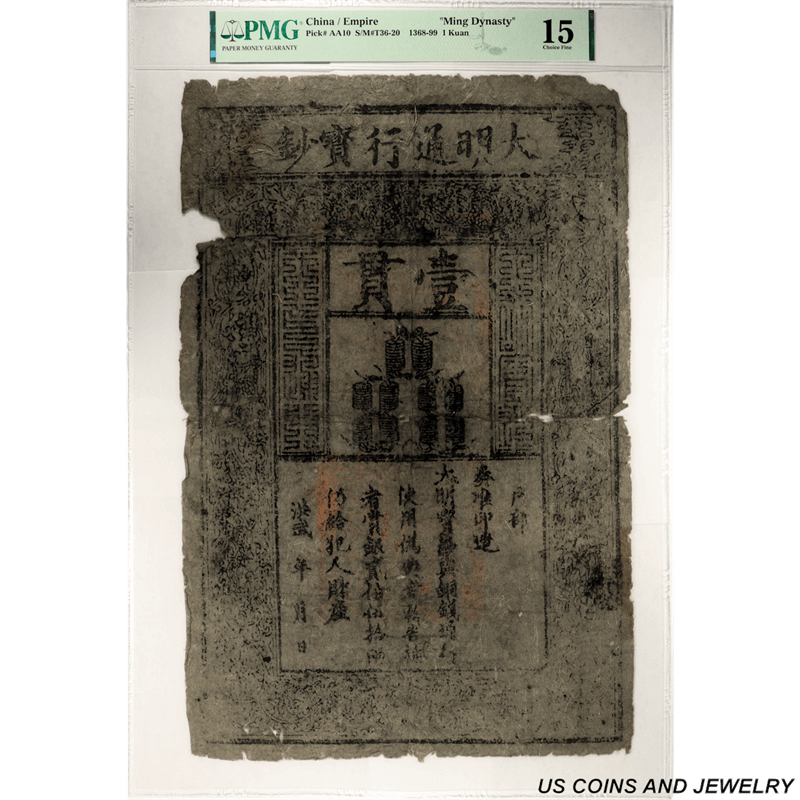 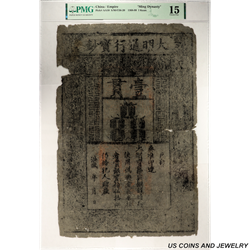 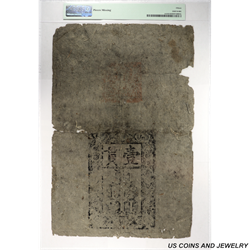 This is a PMG Graded Note. You will receive the pictured Note.

You are bidding on a very rare original note from China -c.1375. Printed during the reign (1368-1398) of the first Ming emperor, Emperor Zhu Yuanzhang (Ming Taizu), a paper note with the original cash value of a string of 1,000 copper coins, or 1 kuan. Woodblock printed in black ink on a sheet of grey mulberry paper, 340 x 220 mm; recto with the Chinese characters Da Ming tong xing bao chao (“Great Ming Circulating Treasure Certificate”) at head; beneath this is a wide decorative border with dragon motif; at the center, the denomination is written in two characters, yi guan (“one string”), with pictorial representations of ten piles of 100 copper coins and further registers of text including instructions for use and the phrase “To circulate forever”, along with warnings of the severe punishments for counterfeiters and an offer of reward for those who inform against them; two authorizing seals in vermilion ink, the first of which reads “Seal of the Treasure Note of the Great Ming Dynasty”, and the second “Seal of the Office of the Superintendent of the Treasury”; verso with repeated pictorial woodblock print and one of the vermilion seals; original horizontal fold; some  loss at top margin , else a fine, strongly printed example.

The Chinese invention of paper money was revolutionary, and may be considered as the origin of our modern paper- and credit-based financial system. Although paper money is known to have been printed in China at various intervals from the ninth century onward, it was not until the first reign of the Ming Dynasty – the last quarter of the fourteenth century – that an attempt was made to institute an entirely paper-based currency system. The symbolic significance of the first 1 kuan banknote that was issued around 1375 is emphasized by the fact that it featured as one the world-changing inventions in the recent British Museum project, A History of the World in 100 objects, selected by the Museum’s Director, Neil MacGregor (the series was broadcast by BBC 4, London, 2010).

Following the disintegration of the Mongol Empire around 1350, one of the first aims of the newly established Ming Dynasty (1368-1644), under its first Emperor Zhu Yuanzhang (Ming Taizu), was to re-introduce a stable currency. The unavailability of copper to cast coinage was one of the factors that led to the decision to introduce paper currency. Furthermore, metal coinage was impractical for large transactions – a “1000 cash” strand of circular coins with square holes for suspension was 1.5 meters in length. The first notes, printed around 1375, were for the denomination of 1 kuan (“1000 cash”); later, in 1389, notes with smaller values were printed (5, 6, 7, 8, 9, 10, 20, 30, 40 and 50 cash). All notes were printed on mulberry paper, and the paper currency became known as fei qian – “flying money”. With their abundance of textual information and instruction, the notes also reflected the Emperor Zhu Yuanzhang’s ideal of a society based on the Confucian principles of education and literacy.

From around 1425, due to the high rate of inflation that had been caused by the over-printing of notes, the use and importance of paper banknotes gradually diminished, and although notes remained in circulation until the mid sixteenth century the printing of paper currency ceased. Silver bullion (much of it from the Spanish mines in South and Central America, obtained through Chinese trade with the Spanish in Manila) became the main currency for the remainder of the Ming and most of the Qing periods.

It is possible that virtually no examples of the first 1 kuan note would be extant, were it not for two serendipitous finds. The first, made during the Boxer Rebellion, was the discovery of a cache of notes in the base of an overthrown statue of Buddha; the second, and much more substantial find, was made in Peking in 1936, when a “bale” of the notes was uncovered during the demolition of one of the city walls; all of these notes were sold to curious passers-by.

Add this Note to your cart today!