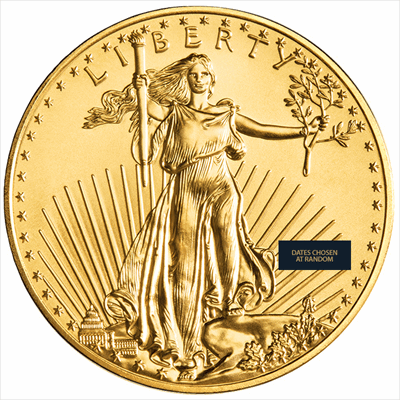 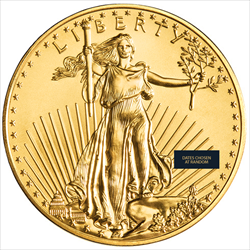 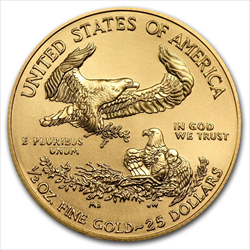 American Eagle 1/2 oz $25 Gold Coin
First released by the United States mint in 1986, the gold American Eagle was the first modern bullion coin to be authorized by the United States congress and is backed by the US Mint for its weight, content and purity. The obverse of the coin, originally designed by Augustus Saint-Gaudens for the country's $20 gold piece minted from 1907 to 1933, carries the image of a full length figure of Lady Liberty holding a torch in her right hand and an olive branch in her left. The reverse side of the coin bears the image of a male bald eagle carrying an olive branch, flying towards his mate in a nest with their hatchlings. The one half ounce gold American Eagle by the United States Mint has a face value of $25.

Obverse: Features a the original design of St Gaudens, a female Liberty to represent victory, with a torch in one hand to show enlightenment, and an olive branch in the other to show peace as she marches over a rocky outcrop with the sun’s rays coming from below. The word “Liberty” overhead, surrounded stars to represent the states of the US.

Reverse: Shows a family of American bald eagles. Designed by Miley Busiek, one eagle is flying down holding branches that will be passed on to the eagle perched in a nest made of olive branches with the young eagles. Multiple engravings surround the eagles, “United States of America,” “In God We Trust”, “E Pluribus Unum”, and below the eagles you will find the purity and denomination 1/2 oz. Fine Gold ~ 25 Dollars. (The gold eagles are based on St. Gaudens’ 1907 Double Eagle design. Eagles are not shown on coins other than coins with a dollar + value).