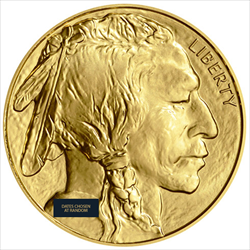 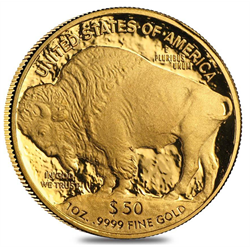 The Mint struck these 24-karat pure gold coins depicting one of America’s most beloved and nostalgic designs in a $50 denomination coin.The coins would depict none other than Earle Fraser’s extremely popular buffalo and Indian chief design. These coins would also be the first bullion coins which did not depict an eagle on the design. All Mint State gold Buffalo coins display an attractive satin like appearance.

*Obverse:* The obverse of the coins portray a delicately detailed and large magnified motif of an Indian chief. This design was composed from a combination of three Indian chiefs who posed for Earle Fraser in the early 1900’s.

*Reverse:* The reverse of the coin is adorned by a large and beautiful bison or what is popularly referred to as a buffalo. The buffalo is shown standing on top of a mound or the same design used to strike 1913 Type one buffalo nickels.

For years, other countries had struck pure gold coins which attracted collectors and investors world wide. Consequently, in 2006, the U.S. Mint decided that it also wanted to capitalize on this market. So, why not chose an extremely popular and beautiful design, in order to attract customers world wide.

In 2009, the U.S. Mint has had to cancel the production of the gold buffalo coins several times throughout the year due to the shortage of gold planchets needed to produce them, and including for other bullion related coins. Therefore, it is also a very volatile series to collect, as there is no telling when and if the coins will be available.

There is no question that the Buffalo gold coin program has been a very successful one. Unfortunately, because of the obstacles in which the U.S. Mint has run in to while producing these coins, it did not allow the program to reach its maximum potential. Regardless on whether the Mint keeps producing Buffalo gold coins or not. It has already captured the attention of investors and collectors world wide who only wish to own pure 24-karat gold coins. And who can blame them, as it is very difficult to resist such a memorable design that is reflected in a beautiful and mesmerizing pure 24-karat gold coin.